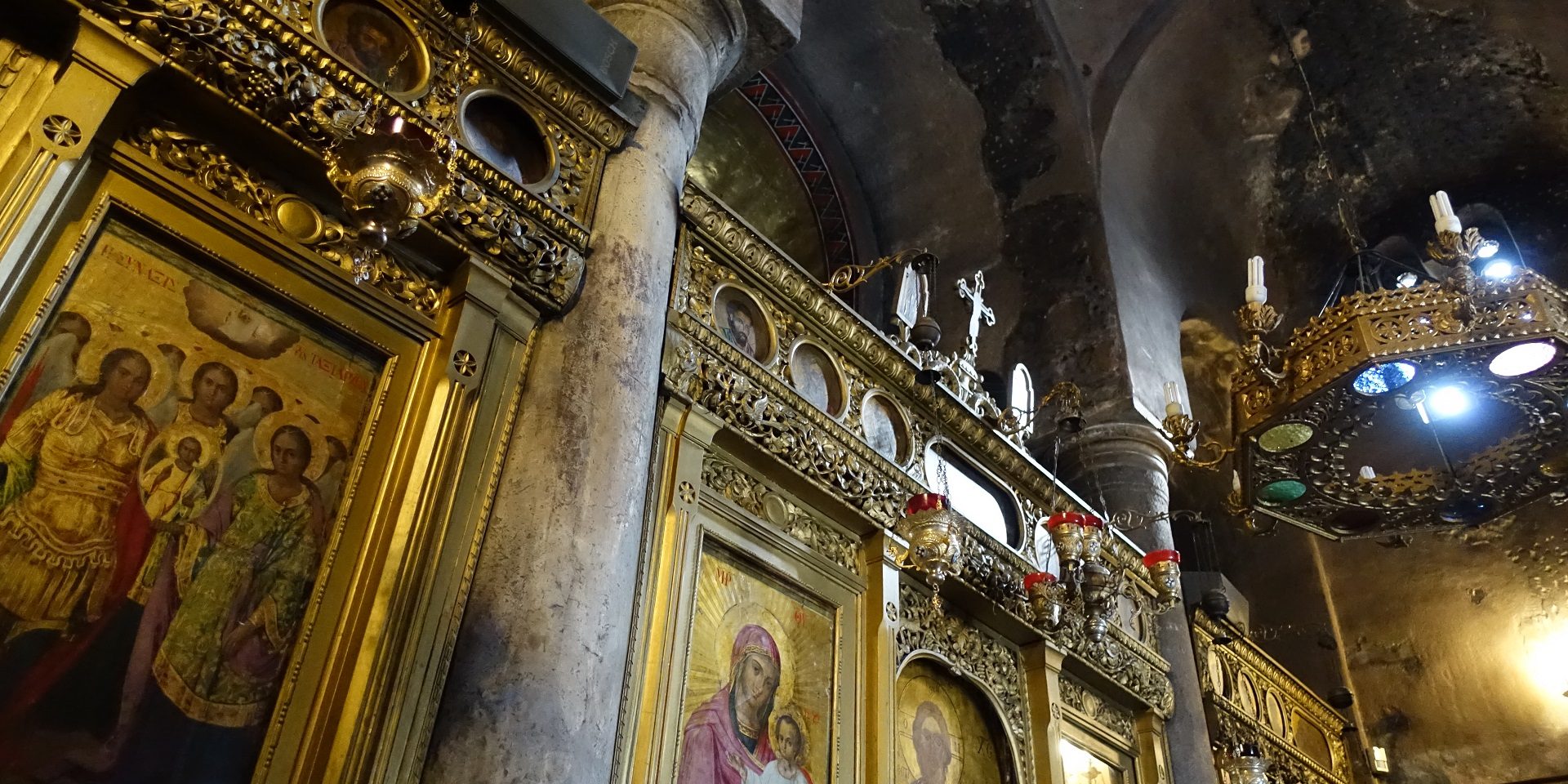 I was raised in Greece. While I never went to a Greek school, I ended up being taught part of the curriculum of Greek public schools. This does include history, unfortunately. Greece is in many ways a new country. It was created at the height of Nationalism in the 19th Century and needed a national history that would help unify its new state. Greek historians thus constructed an intricate history the core of which is still taught in schools.

Why am I saying this? Having grown up in a world that kept on telling me that the Eastern Roman Empire was basically a Greek Empire, almost like a continuation of Alexander’s Empire (let us leave my views on him out – I might get lynched), I despised the very notion of anything Byzantine. Add to that my not being particularly fond of Greek Orthodox Church architecture and art, and you get twenty-five years of disregard and maybe even hatred towards the Byzantine Empire. Understandable though such a feeling might be, it was wrong.

I have been teaching first year undergraduates on Early Medieval History (400-1000) for the past two years. This last semester, while teaching Theodosius II (401-450) and his laws, I started feeling a tingling sensation of interest. Then it was the turn of Justinian I (483-565, Theodora (500-548) and the writings of Procopius of Caesarea (500-565). That had been my favourite chapter the first time I taught on that course and this time I was over the moon. I felt that the time was right. I bought the Loëb edition of Procopius’ Anekdota. What a treat. Not only did I mostly understand the Greek of that period, I also just loved the whole book. More books followed. Whether you would rather call it Eastern Roman or Byzantine, that world is enchanting.

It just so happens that I had the chance to travel to Athens for the winter vacations. Athens is not well known as a Byzantine city. If you want to see a Byzantine city, you would better go to Thessaloniki (or, of course, Istanbul). In fact, most of the museums and sites you will be directed to if you ever visit Athens will be Ancient, with a couple of Revolutionary period ones. By the time Greece got its independence (1832), Athens had a population of about 5000 people. It was not made into the capital because of its economic or political importance, but for historical reasons. While such decline partly happened during Ottoman rule, Athens started losing inhabitants as early as the Macedonian invasion in the 4th century BC. It was definitely not a big centre for the Roman Empire of the East. While I do not claim any great knowledge on the matter, I would hazard that Athens’ significant classical and pagan past did not necessarily agree with the Christian views of many Byzantine Emperors (I can only imagine what Theodosius I’s [347-359] ban of polytheism did to this city), and that much of its artistic splendour was either left to waste or taken to Constantinople.

A further reason for the seemingly limited Byzantine history in Athens can be found in a different place. Take the Acropolis, for example. If you go and visit, you will mainly see (or be shown) Golden Age period structures. It almost feels as if time stopped in the Acropolis between the great Ancient Athenian period and the moment the Venetians blew the Parthenon up. That is most definitely not the case. The Acropolis kept being used, and other buildings were added, including shrines to Roman Emperors, and a number of Byzantine, Frankish and Ottoman structures. The Parthenon was made into a church and then later on into a mosque. Where are all these structures now? We are not even told about them. Well, they were all “cleared out” by archeologists in order to cleanse the site. The Acropolis was a living, breathing, place up until the 19th Century.

Indeed, after having set out to find what I had expected would be a handful of old churches, I came to the realization that there are a multitude of Byzantine period churches that one could visit in Athens. What is more, most can be visited in half a day, or as part of an Ancient Athens itinerary.  First of all, if you ever visit Athens, do make sure to go to the Byzantine and Christian Museum. I know that you came here to visit Ancient stuff and that maybe such a place sounds boring. If it is of any consolation or help in convincing you to go, bear in mind that the museum is located centrally, close to Syntagma square, right next to the Evangelismos Metro Station, and very close to the Museum of Cycladic Art, a museum that should you choose to forgo visiting you would be worthy of being waterboarded for a few nights. It is not that big of a museum and it will certainly show you and teach you a lot, especially if you are not well read on this period.

Now, onto visiting proper sites. Let us start with two churches that you could visit while seeing Ancient stuff. If you consider yourself as having great imagination, try to picture the Parthenon as the church of Panagia Athiniotissa. 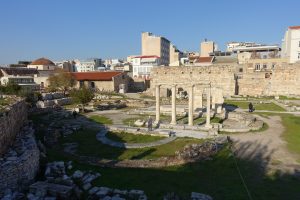 While in the Athenian Agora, if you have entered from the main entrance at Adrianou Street, on the other end, walking towards the slope of the Acropolis and not far from the Stoa of Attalos, you will find the Church of  Άγιοι Απόστολοι Σολάκη, or the Holy Apostles of Solakis. It is a small church that, unfortunately, is closed to the public; but it’s still is a great example of how these ancient sites kept on being used during the Byzantine period. While visiting the Library of Hadrian you will see the remains of three Byzantine churches. During the 5th Century, a tetraconch was built in the court, followed by a basilica in the 7th Century, and lastly, in the 12th Century, the first cathedral of Athens. During this time, a smaller church, Άγιος Ασώματος στα Σκαλιά, or Agios Asomatos sta Skalia, was built, but nothing remains of it nowadays. Lastly, while visiting the Temple of Olympian Zeus, on its other side, close to the Olympion, you can see what remains of the basilica of Ilissos. In the temple of Olympian Zeus itself, if you look closely up the remaining columns, you will see some brickwork, dating back to a small building made by stylite monks that inhabited up there.

Sure, Vittorio, this all sounds good, but up to now you have only told is to visit ruined churches and a small one that is closed and can only be seen from outside. Is there any point to this? I understand your possible skepticism, but keep in mind that all I have mentioned up to now is located in places that you would presumably be visiting any way because of their Ancient importance.

Worry not! There are enough “proper” churches for you to visit. I have taken the liberty of creating an itinerary for you, which you can follow here. This itinerary starts from Syntagma, but could be begun anywhere. It is about four kilometres and includes a number of churches. Keep in mind that photography is not allowed inside most of these churches (I sneaked a pic inside the church of Agioi Asomati in Thisseion because I like to live on the other side of the law).

Dwarfed by the Mitropoli, the main and biggest church in the city, you can find the Ναός της Θεοτόκου Γοργοεπήκοου και Αγίου Ελευθερίου, or Panagia Goroepikoos church. Its build date is somewhat deb 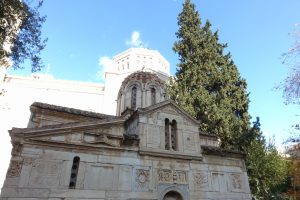 ated, with a terminus ante quem (the latest date by which something happened) in the 13th Century. Legend says that this church was founded by Empress Irene, born in Athens and of blinding fame in Byzantine history. She also happens to be one of my favourite historical personages. The church of Kapnikarea, situated in Ermou Street (the main shopping street in Athens) is my favourite of them all. It is considered to be one of the oldest surviving churches in the city, and dated to the 11th Century. On the inside, one can find stunning decorations, including a mosaic of the Virgin Mary with Child that is fascinating. According to Nikolaos Gkioles, the Church was about to be demolished during the reign of Otto I of Greece, but Ludwig I of Bavaria intervened and saved the church. A bit outside of the main area (and first to be removed from the itinerary if you wish to make it shorter) is the church of Άγιοι Θεόδωροι, or Agioi Theodori. The church 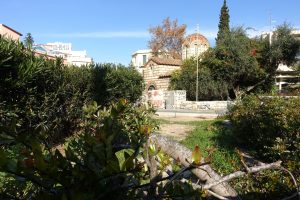 is dated to the 11th Century as well, and is similar to the Kapnikarea. A number of interesting inscriptions can be found there. Proceed to the square at Monastiraki to find the Ιερός Ναός Κοιμήσεως της Θεοτόκου, or Church of the Pantanassa. This church belonged to the monastery that named this area. Some of the icons inside are stunning. Proceed with Άγιοι Ασώματοι, or Agioi Asomati, at Thisio. I would say this is possibly my favourite of the churches on the outside. Inside, it is particularly austere, and its blackened walls and roof are mainly empty. It was built towards the end of the 11th Century.

Going back towards the slopes of the Acropolis in the beautiful neighborhood of Plaka, you can see the Church of  Μεταμορφώσεως του Σωτήρος, known also as Sotiraki because of its small size and the fact that there is another church with the same name not far from there. Just like most of the churches visited in this itinerary, it was built in the second half of the 11th century. Close to it, you can find the church of Saint John the Theologian, dated to the early 12th Century. While neither are accessible (as far as I know), with the exception of a few open days a year, they are worth a visit not only because of their external beauty, but mainly (I would say) because of the extreme attractiveness of this part of Plaka. Lastly, and closest to my house, you can find the Church of Αγία Αικατερίνη, or Agia Ekaterini, a church built next to the remains of an ancient building (worth a visit – it lies hidden beneath some vegetation), particularly close to the Lysicrates monument. Agia Ekaterini was built in the 11th Century, but may also be of interest to people that are looking into the Greek Revolution. One of the heroes of the Revolution, Ιωάννης Μακρυγιάννης, or Ioannis Makrigiannis, famous for his Memoirs, used to come here and pray.

Some of these churches look similar. They are all nonetheless very interesting, and especially the ones that are accessible are definitely worth a visit. Are they as nice to visit as the Acropolis? I certainly would not say that. But they do show, better than anything else, that life in Athens continued even after Alexander conquered it. Athens may have lost its centrality and importance in the Western world, it may have ended up the size of a small town, but it endured.

Hire a chauffeur and enjoy traveling around Greece
August 28, 2019