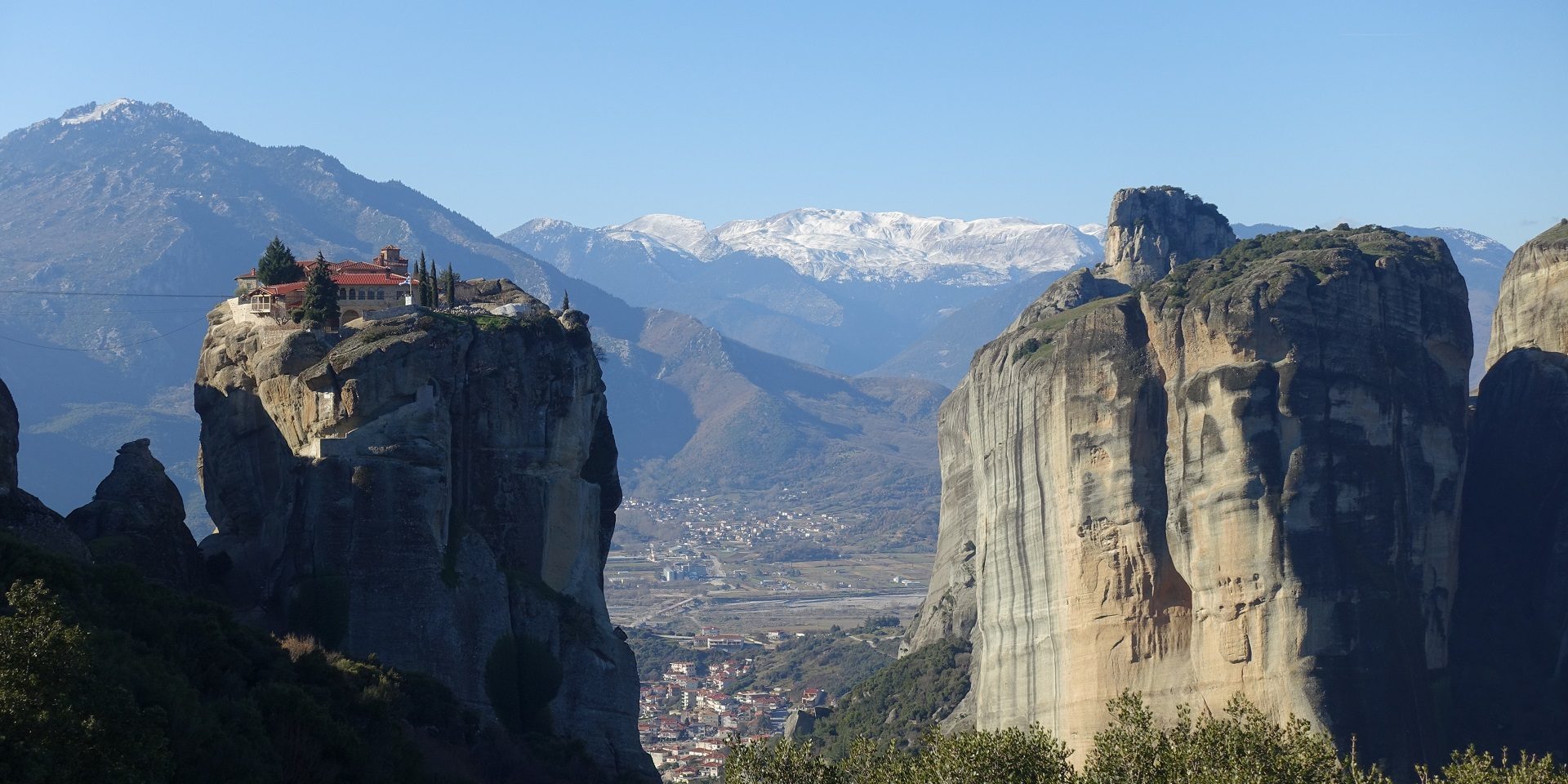 As I discussed in a previous post, most people that visit Greece go there for either the ancient sites, or the beautiful islands and beaches offered by the country, or, of course, a combination of those two. Parts of mainland Greece are thus sometimes disregarded and relegated to a secondary position in travellers’ itineraries. In January 2017 I decided to visit the heart of mainland Greece, focusing on the region of Thessaly. What a region that is. The main reason it is known for are the monasteries at Meteora, literally ‘suspended in the sky’. However, the monasteries are not the sole reason for visiting this stunning region. The area around Meteora is a prime example of the progress of the history of mankind. Just a few kilometres south of Meteora is located Theopetra cave, on the boundary between Thessaly and Macedonia.

According to a local webpage, Theopetra has the remains of a stone wall built in 21000 BC, making it the oldest surviving man-made structure in the world. When I read that, I was, needless to say, skeptical about such a bold claim. I would have expected such a greatly important place to be well known throughout the country, and the rest of the world. I set out on a researching adventure and spent an evening looking around the internet and trying to find out whether such a surprising claim was to be believed. As far as I knew, the oldest surviving buildings would be Göbekli Tepe, Çatalhöyük, both located in Turkey, or Ġgantija, in Malta. Well, I was completely wrong on all fronts. First of all, the first two and Theopetra cave are not listed as part of the world’s oldest buildings for the simple reason that they do not strictly meet the definition of ‘building’. Ġgantija, on the other hand, does count as a building. However, Ġgantija is not the oldest building that we know of, it is not even the second oldest. Both first and second oldest surviving buildings are to be found in France and are Barnenez and Tumulus of Bougon. However, if one were to look at any kind of structure, disregarding height and other requirements that make something a building, Theopetra does indeed appear as the oldest known man-made structure. They were right after all! How exciting was the thought of visiting this cave, and how exciting is it to know that 21000 BC is not the earliest that Theopetra was inhabited. Deposits in the cave are said to start back in 50000 BC and are continuous up until 4000 BC. According to the work published in 2012 by the lead palæo-anthropologist of the cave, Katerina Kyparissi-Apostolika, records of habitation can be taken further back to 135000 BC. Theopetra shows the evolution of mankind itself, the replacement of the Neanderthals by Homo Sapiens Sapiens and the transition to farming after the Ice Age. The region around Meteora shows  signs of habitation all the way up to today.

I started my trip from Athens early one Monday morning. The drive took me through the main highway that goes from Athens to Lamia, passing the vicinities of places such as Thebes and Thermopylæ. From Lamia I proceeded towards Karditsa and then Trikala. Kalampaka is the town closest to Meteora but I stayed in a lovely hotel located in the small village of Kastraki, on the other side of Meteora. The drive from Athens to Kastraki takes about four hours but if one chose to stop once in a while in order to see some beautiful landscapes and have a snack, expect it to take clo

ser to five hours. I stopped at Thermopylæ, the famous Hot Gates where the 300 Spartans of King Leonidas fought and died valiantly against the Persian invaders. The landscape has changed dramatically since 480 B.C., but with a little bit of imagination and the help of a map which depicted the landscape as it was, one can see how it used to be. However, it is the monument to Leonidas, with the inscription Ὦ ξεῖν’, ἀγγέλλειν Λακεδαιμονίοις ὅτι τῇδε κείμεθα, τοῖς κείνων ῥήμασι πειθόμενοι, ‘Oh stranger, tell the Lacedaemonians that we lie here, trusting their words’, attributed to Simonides and said to be placed on top of their burial mound, that are the most emotional to see.

Having arrived at Meteora somewhat late and tired, I spent what was left of Monday visiting the Great Meteoron monas 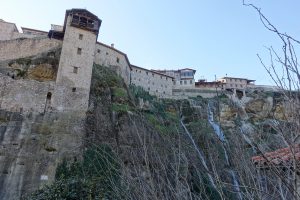 tery which I found out was closed on Tuesdays. The monasteries of Meteora are a great example of life in Greece during the later period of the Byzantine Empire. The Great Meteoron monastery is the largest and was founded by Saint Athanasios the Meteorite in the 14th Century. I then proceeded to the second largest monastery, located in the vicinity of the Great Meteoron. Varlaam Monastery was founded in the mid 1300s and takes its name from its founder. The building was furthered in the mid 16th century and consecrated to Agioi Pantes.

Tuesday started badly. Here, I would like to tell you that I visited the monastery of Agia Triada, ‘Holy Trinity’, the one I was most keen on visiting. It is the least accessible of the lot, but it provides a panoramic view of Meteora that no picture can do justice to. The monastery was built before 1362, though there does not seem to be a specific date ascribed to its founding. The James Bond lover among the readers might recognise this place from For Your Eyes Only, not even close to being my favourite Bond movie. Well, no pictures of 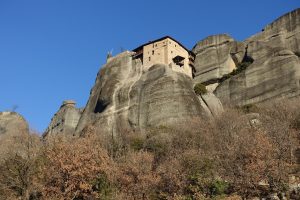 mine can do it justice, that is for sure. The official tourist webpage of Meteora failed to inform me about the closure of Agia Triada from summer 2016 for restoration. Instead of Agia Triada, I thus decided to visit Agios Nikolaos Anapafsas. This is the most vertical of the monasteries at Meteora, built on many levels. It is a difficult hike to get up there, since one has to walk up a slope for a while before even reaching the first steps up the monastery – or it felt difficult because I had caught a bug. I was not expecting Agios Nikolaos Anapafsas to be that nice, but I was wrong. It turned out to be the nicest of the monasteries visited in this trip. It may be smaller than Varlaam or the Great Meteoron, but its church, dedicated to St Nicholas is stunning, with some of the most beautiful Orthodox frescoes I have ever seen (be on the lookout for a beautiful fresco with many animals, including a funny elephant).

Right next to Agia Triada – which I ended up seeing only from outside – and more accessible, is the monastery of Agios Stephanos. It is one of the oldest monasteries in the area that are still in use, dating back to the first half of the 12th Century. Most of it was rebuilt in the 1400s but part of it was bombed during the Second World War. It is one of the two nunneries that are still in use, the other one being Roussanou, which I did not get to visit. It also happens to be the most accessible of the lot, as it has very few steps and is located right next to the parking space. There are more monasteries in Meteora; most abandoned while others are still in use.